by admin
in Technology

In a recent study published in the Microbial Biotechnology journal, researchers explored the health effects of micro(nano)plastics and their degraded products on the gut microbiome.

The consequences of plastic waste on the environment and human, animal, and plant health have risen as a global concern, with micro(nano)plastics (MNPs) serving as the primary focus. The presence of MNPs in the food chain has resulted in an increase in human consumption. They have been identified in the majority of consumable food categories, potable, and even human fecal matter. Therefore, oral intake is the primary route of exposure to MNPs. In addition, the gastrointestinal system, particularly the gut, regularly interacts with these fine particles.

Study: The gut microbiota, a key to understanding the health implications of micro(nano)plastics and their biodegradation. Image Credit: chayanuphol / Shutterstock

The impact of MNPs on the microbiota of the gut

Over the past two decades, the significance of gut microbiome–host relationships has been increasingly recognized, with scientific evidence indicating the central function of the gut microbiota in proper host development, with consequences for host physiology and health maintenance. Importantly, the gut microbiota is regarded as an “organ” exposed to environmental alterations and trauma as the first line of defense. In addition, MNPs can penetrate the gut directly and collect in the intestine; hence, some animals consumed as complete organisms can be a significant vector for the human ingestion of MNPs.

Changes in the microbiome of aquatic species caused by MNPs

Studies have shown that nano plastics (NPs) elicit more acute inflammation and dysbiosis as compared to MPs in zebrafish. A study showed alterations in the gut microbial populations of adult Medaka fish (Oryzias melastigma) exposed to polystyrene (PS) MPs, according to particle size. In addition, the rise in the ratio of Verrucomicrobia and Firmicutes/Bacteroidetes and the reduction in Fusobacteria members were associated with increased body weight.

At realistic concentrations, the effects of exposure to PS MPs in untreated and seawater on the gut microbiota present in marine bivalve blue mussels (Mytilus edulis) have been reported. Potential human pathogens displayed elevated abundance after MP exposure for six weeks, while some maintained higher abundance after eight days of depuration. MNP-induced effects on intestinal microbiota may also be conceivable due to the biofilm present on their surfaces, which has significant consequences on aquatic species. In addition, a significantly higher incidence of antimicrobial-resistant genes was observed in microbiomes that were isolated from MPs, demonstrating the capacity of MPs to serve as habitats for upregulated gene exchange.

Effects of MNPs associated with diseases of the gut microbiota

As described in invertebrates and vertebrates, including mammals, disturbance of the gut microbiome could lead to an increase in gut barrier dysfunction, gut permeability, as well as immunotoxicity. Consequently, gut bacteria and their byproducts might penetrate the systemic circulation and harm organs and tissues. Opportunistic pathogens degrade the integrity of the gut barrier, allowing pro-inflammatory chemicals like bacterial lipopolysaccharide (LPS) to permeate through and initiate proximal damage in other organs.

Intestinal dysbiosis can alter the thick mucus layer, which may result in aberrant mucus invasion and epithelial adherence of pathogens, or may permit the interaction of MNPs with the epithelial layer and damage the gut epithelium, thus altering the intestinal milieu. Mucus-associated bacterial biofilms may contribute to these conditions. As per in vivo investigations, MPs stay bound to the intestinal mucus layer and can directly interact with the apical portion of intestinal epithelial cells, causing local inflammation and intestinal barrier damage. 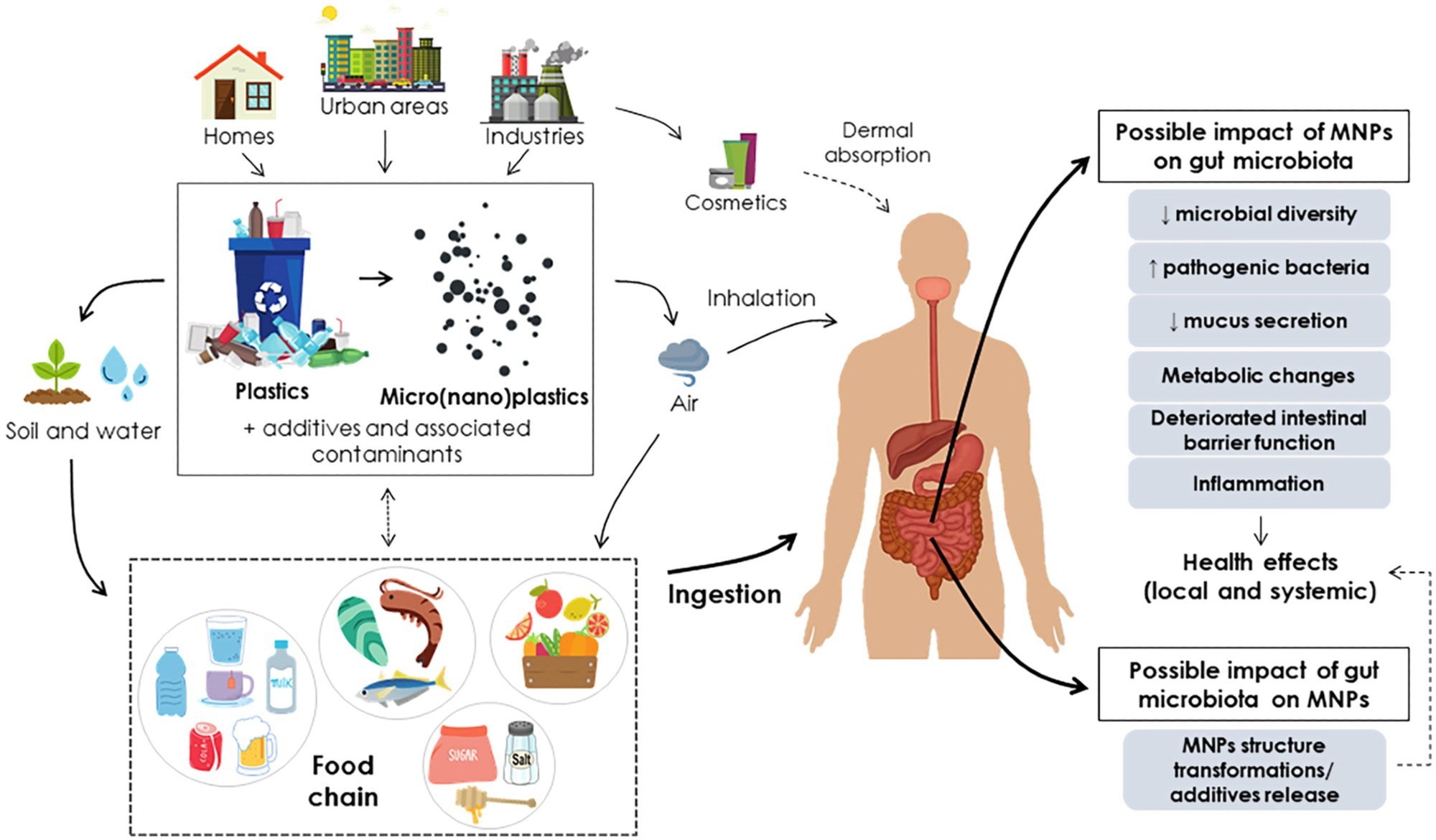 Routes of micro(nano)plastic exposure to humans and their impact on the gut microbiota. Designed using elements by ©Canva via Canva.com (access date: May 2022, version used Canva 2.0)

Potential health effects of biotransformation of plastics by the gut microbiome

Gut microbiota is a major driving factor of MNP/plastic degradation, with insect larvae receiving the most attention. Mealworm larvae are capable of degrading plastics generated from petroleum, like low-density polyethylene (LDPE), polyvinyl chloride (PVC), PE, polypropylene (PP), PS, and bioplastic polylactic acid (PLA). Multiple studies have demonstrated that this biodegradation is not observed post-antibiotic treatment with mealworms while their gut microbiota alters following exposure to MPs, indicating that their gut flora enables the degradation of various MPs.

Overall, the study findings showed that MNPs negatively impact gut microbiota after oral ingestion by facilitating intestinal dysbiosis, impaired metabolic functions, and an inflamed gut environment. However, its long-term effects are still unknown. The alteration of the gut microbiota can therefore be a relevant indicator for MNP toxicity.

Flavonoids with potential to fight allergies and inflammation

What are ‘smart intersections’ and how could they help?

Our Spring Sale Has Started

You can see how this popup was set up in our step-by-step guide: https://wppopupmaker.com/guides/auto-opening-announcement-popups/