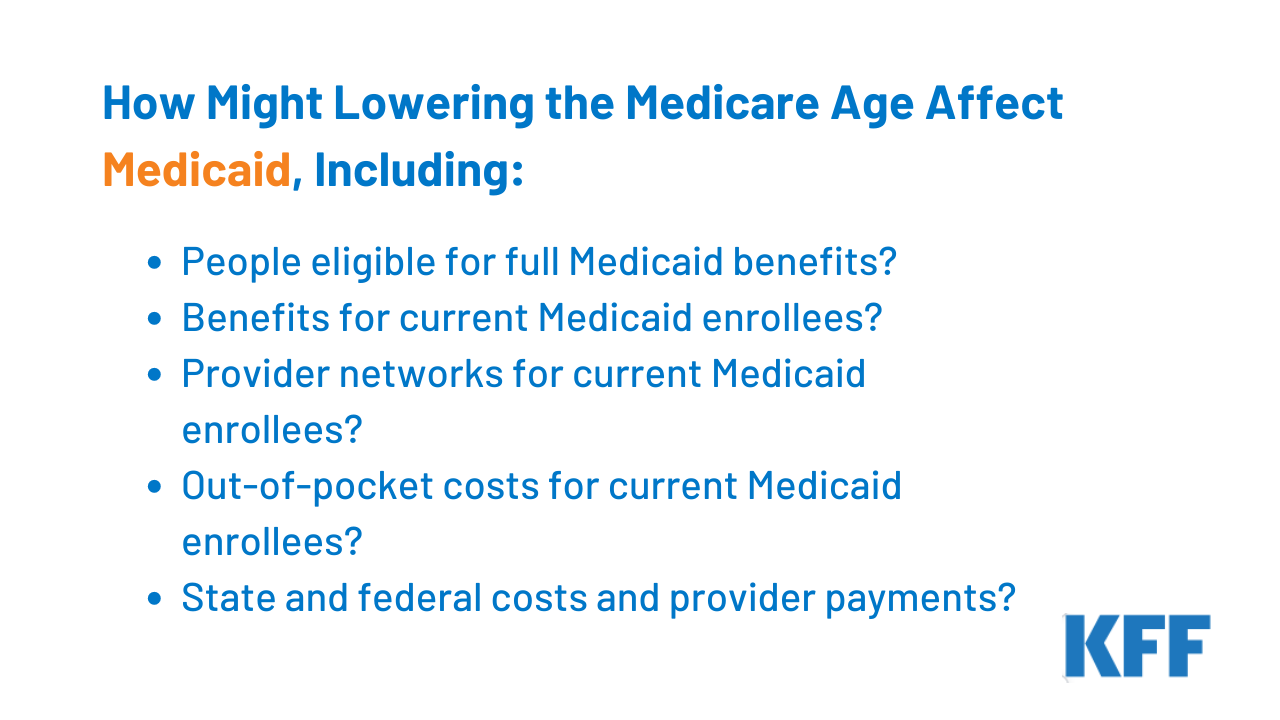 President Biden’s FY 2022 budget proposes lowering the Medicare enrollment age from 65 to 60, and a group of over 150 House Democrats recently called for a provision lowering the Medicare age to 60 or 55 to be included in the President’s American Families Plan. President Biden’s budget proposes “giving people age 60 and older the option to enroll in the Medicare program with the same premiums and benefits as current beneficiaries, but with financing separate from the Medicare Trust Fund.” The President’s budget proposal does not detail how lowering the Medicare age would work or be financed, or how it would affect current Medicaid spending and enrollees. While lowering the Medicare eligibility age based solely on work history to 60 could provide coverage to older adults who are currently uninsured or provide a more affordable option for people with private health insurance coverage, it also could affect Medicaid enrollees in this age range. Some Medicaid enrollees might lose Medicaid coverage when they gain Medicare, and others might become dually eligible for both programs, depending on the details of how it would work.

There are 3 million adults ages 60-64 enrolled in Medicaid as of 2019, just under 1 million of whom are already dually eligible for both Medicare and Medicaid (because they receive Social Security Disability Insurance (SSDI)). Medicare covers over 60 million seniors and nonelderly adults with significant long-term disabilities. Under current law, people with a sufficient work history are entitled to enroll in Medicare at age 65, and enrollment for non-elderly adults is limited to people who receive SSDI, generally after a 24 month waiting period. This issue brief highlights key differences between Medicare and Medicaid and raises questions about how a policy to lower the age of Medicare eligibility could affect individuals who are currently enrolled in Medicaid.

How could lowering the Medicare age affect people eligible for full Medicaid benefits?

What is current policy? Today, some people are eligible for both Medicare and full Medicaid benefits, while others may lose Medicaid eligibility once they become eligible for Medicare. A person’s status as a Medicare beneficiary does not qualify them for full Medicaid benefits. Instead, a person must independently qualify for Medicaid through an eligibility pathway based on low income or disability. Individuals in the 60-64 age range may qualify for Medicaid through various pathways that may have different eligibility criteria and benefit packages. For example:

What are the key policy choices and implications?  Lowering the age for Medicare would require policy choices about whether to allow individuals in the new age range to continue to receive full Medicaid benefits, if eligible under the ACA expansion or other poverty- or disability-related pathways, or whether these individuals would move from Medicaid to Medicare as their sole or primary source of coverage. How these eligibility issues are resolved has important implications for enrollee benefits and cost-sharing as well as state and federal costs (discussed below). Additionally, Medicare enrollment is limited to specific periods, while Medicaid enrollment is open year-round. However, Medicaid eligibility must be periodically renewed, while Medicare eligibility currently continues without the need to renew eligibility once a person turns 65.

How could lowering the Medicare age affect benefits for current Medicaid enrollees?

What is current policy?  Medicare and Medicaid’s benefit packages differ. Both cover inpatient and outpatient care and prescription drugs. Medicare generally includes wider participation of providers, though Medicaid drug coverage is broader. Medicaid also covers long-term care services in nursing homes and the community and specialty behavioral health services, which Medicare generally does not. Medicaid covers dental, vision, and hearing benefits for adults at state option. Traditional Medicare currently does not generally cover these benefits, although most Medicare Advantage plans do offer some dental, vision and hearing benefits. President Biden’s budget calls for adding these benefits to Medicare. Medicaid rules also require states to recover the cost of long-term care benefits provided to people age 55 and older from the estates of deceased enrollees, and other costs may be subject to estate recovery at state option. Medicare does not require estate recovery, though it also does not cover long-term care services. The appeals process also differs between the two programs, with Medicaid allowing services to continue while an appeal is pending.

What are the key policy choices and implications?  Policy choices about whether individuals in the new age range could retain Medicaid if eligible or instead would move from Medicaid to Medicare are important because individuals currently eligible for Medicaid could lose access to benefits not covered by Medicare if they are required to move to Medicare as their sole source of coverage. Additionally, those appealing benefit reductions or terminations would not have continued access to services while appeals are resolved in Medicare as is the case in Medicaid.

How could lowering the Medicare age affect provider networks for current Medicaid enrollees?

What are the key policy choices and implications? People could gain access to a broader provider network through traditional Medicare compared to their state’s Medicaid program. If moving from Medicaid to Medicare, individuals could experience  changes in delivery systems and provider networks, depending on whether they opt for Medicare Advantage or traditional Medicare, which could mean disruptions in care.

How could lowering the Medicare age affect out-of-pocket costs for current Medicaid enrollees?

What is current policy? The Medicare Savings Program (MSP) is a Medicaid pathway that helps to cover Medicare’s premiums and/or cost-sharing requirements for current Medicare enrollees with low income and limited assets. This is an important consideration because Medicare’s premiums and cost-sharing are higher than those under Medicaid, which limits the populations who can be subject to premiums and has nominal cost-sharing. Box 1 summarizes current Medicare out-of-pocket costs and the assistance available through MSP.

Medicare Part A, which covers inpatient hospital services, has an annual deductible of $1,484 in 2021. Medicare Part A also requires co-insurance for hospital stays over 60 days. Most Medicare beneficiaries qualify for Part A without a premium, based on their work history. Medicare Part B, which covers outpatient services, requires a monthly premium of $148.50 for most beneficiaries in 2021. Part B also requires an annual deductible of $203 in 2021 and co-insurance of 20% of the Medicare-approved cost of services after the deductible is met.

Qualified Medicare Beneficiaries (QMBs) generally have incomes up to 100% FPL ($1,073 per month for an individual and $1,452 for a couple in 2021). Four states set their MSP income limits above the federal minimum as of 2018. Most states adopt the federal asset limit of $7,970 for an individual and $11,960 for a couple, though a few states have higher asset limits, and nine states have no asset limits as of 2018. Medicaid pays Medicare Parts A and B premiums and cost-sharing for QMBs.

Specified Low-Income Medicare Beneficiaries (SLMBs) have slightly higher incomes (100-120% FPL) and receive help with Medicare Part B premiums only. Most states set their SLMB income limits at 120% FPL ($1,288 per month for an individual and $1,742 for a couple in 2021). The asset limits described above also apply to the SLMB group.

Qualified Individuals (QIs) are eligible for Medicaid assistance with Medicare Part B premiums through an expansion of the SLMB program. The QI program covers Medicare beneficiaries with incomes up to 135% FPL ($1,449 per month for an individual and $1,960 for a couple in 2021). The asset limits described above also apply to the QI group. Unlike other Medicaid pathways, because Congress only appropriates a limited amount of funds to each state to pay for the QI program, once a state’s QI appropriation is spent, additional individuals who meet the eligibility criteria cannot receive help.

What are the key policy choices and implications?  Proposals to lower the Medicare age likely will have to account for what type of assistance would be available to make the new coverage affordable for lower income enrollees, such as individuals who may lose Medicaid and transfer to Medicare. Without addressing this issue, some people could face higher out-of-pocket costs in Medicare compared to Medicaid. For example, people ages 60-64 who currently receive Medicaid in the ACA expansion group are eligible for that coverage based on their low incomes and without an asset test. When these individuals become eligible for Medicare under current law, they must meet both income and asset limits (Box 1) to qualify for MSP help with Medicare out-of-pocket costs. Though a few states have expanded or eliminated MSP asset limits, this generally means that individuals with savings above $7,970 would be ineligible for MSP, even though they might have been eligible for full Medicaid benefits in expansion states.

How might lowering the Medicare age affect state and federal costs and provider payments?

What is current policy? Medicare is a federal program primarily financed by a combination of payroll taxes, general revenue, and premiums. In traditional Medicare, the federal government establishes the methodology for making payments to hospitals, physicians and other health care providers under the traditional Medicare program and uses a formula to establish capitated payments to Medicare Advantage plans. In contrast, Medicaid is financed jointly by states and the federal government, and states determine provider payment rates within broad federal standards.

What are the key policy choices and implications? The precise impact of lowering the Medicare age on federal and state costs depends on how the policy is structured. Transitioning current Medicaid enrollees to Medicare would be likely to increase federal spending and reduce state costs as states would no longer share in the costs of covering these individuals. If individuals 60-64 are permitted to retain their current Medicaid eligibility, states would continue to fund a share of these individuals’ Medicaid costs, though Medicare would be the primary payer for the benefits it covers. If enrollees move to Medicare and do not retain full Medicaid eligibility, the federal government would no longer pay for a share of benefits that are only available through Medicaid (like long-term care).

Whether and how lowering the Medicare age would affect provider payment rates is likely to vary depending on the type of provider. Medicaid payment rates for hospitals vary across states, but after accounting for supplemental payments, overall rates for hospitals are comparable to or higher than Medicare. Lowering the Medicare age might lead to lower revenues for physicians, as Medicaid payment rates for physicians tend to be lower than Medicare. Gross margins for Medicare Advantage plans are higher than for Medicaid managed care plans, though Medicare Advantage plans now cover an older population with higher health spending. While rates in Medicaid plans must be actuarily sound, they tend to be lower than other markets.

Lowering the Medicare enrollment age could have considerable impacts on the scope of covered benefits, out-of-pocket costs, and provider access for low-income people as well as implications for state and federal health care costs. Depending on individual circumstances and key policy decisions, people who move from Medicaid to Medicare might experience higher out-of-pocket costs and/or fewer covered benefits. On the other hand, they might have access to a broader provider network in traditional Medicare, compared to their state’s Medicaid program. On the whole, current Medicaid enrollees are likely to face different issues than those who move from private insurance or uninsured status to Medicare.